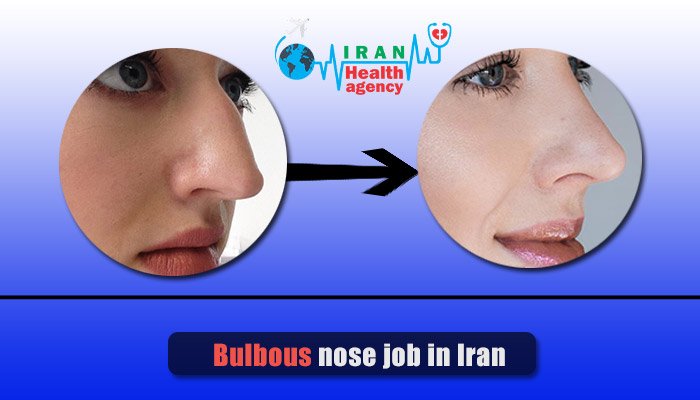 Rhinoplasty or nose job is a facial plastic surgery in order to reshape and resize the nose. bulbous nose job is one of the most common types of this popular procedure. Stay tuned to learn more about bulbous or rounded Rhinoplasty.

Is my nose bulbous?

Nose surgery at an amazing price in Iran 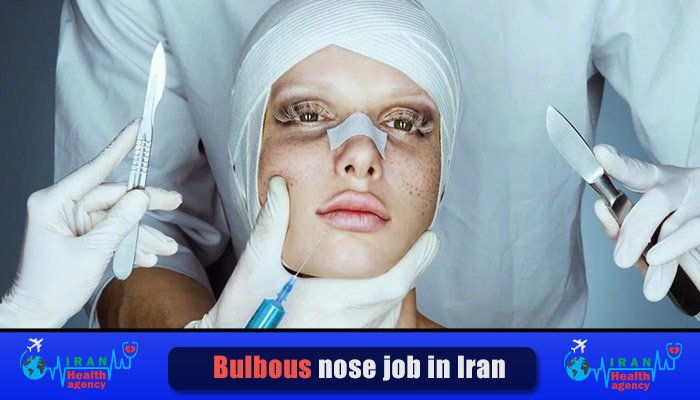 What is done during bulbous nose job?

The purpose of bulbous nose job is to bring the patient to aesthetic goals. but what is done to bulb use nose is not a fixed formula for everyone. Actually the details of procedure will be discussed during the consultation.

In the past, the surgeons use to remove a large amount of tissue and cartilage to improve the appearance of bulbous tip .it was a common and popular approach among surgeons but then it turns out that shaving and resection of nasal cartilage, not only doesn’t remove the bulbosity but also chips away at the general nasal appetence. Actually this wrong method ends up uneven nostrils, pinching tip and destabilization.

New method goes toward reconfiguring and refining small cartilage edges to address the tip without compromising nasal structure, but sometimes it may also require special suturing techniques or cartilage grafting or a combination of all of the above.

New method results in natural nasal look by improving the cartilage instead of removing it.

As the skeletal support of the bulbous nose is weak, the nasal size is first adjusted to shape the nose and the cartilage that is not in good shape is removed. Then weak structures are reinforced by cartilage bonds.

The additive tissue is most often cartilage that is removed from the nasal septum, but is sometimes bony and unusable due to a history of trauma or fracture or because of the unspecified cartilage. ear cartilage is usually the second choice  .

It should be noted that removing cartilage from the ear has very little effect and should not cause any concern.

All above bulbous nose job requires more proficiency and experience therefore the surgeon must be selected considerably.

rhinoplasty before and after photos 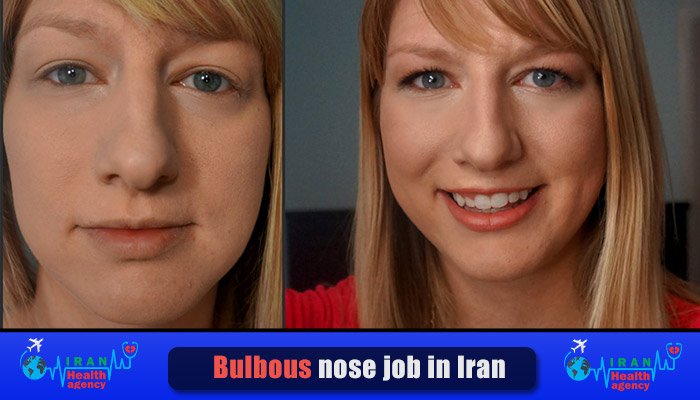 Which method is the best for bulbous nose?

Small deformities can be fixable with closed Rhinoplasty but when it comes to severe problems open Rhimoplasty is better option since it gives full vision and access to internal parts.

To learn more about closed and open Rhinoplasty have a look at the highlighted article:

When is the best age for bulbous nose job?

Normally, the appropriate age for nose job is 18 years, but if the physical development is complete It is also possible at an early age such as 15 years 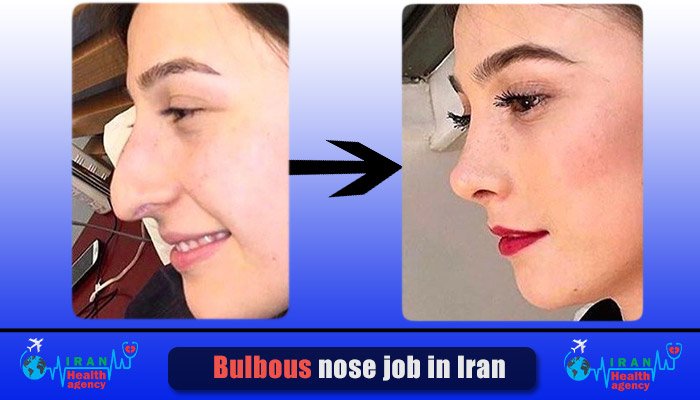 What to do before bulbous nose job?

in the following paragraph there are some points to be observed before the nose operation. But be sure to consult your doctor for more detailed information. 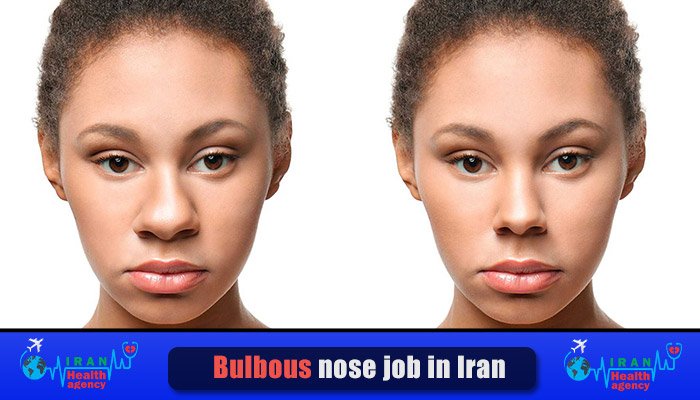 What to do after bulbous nose job?

The first 2 hours after surgery is the most difficult time for recovery. During this time, the effect of anesthetic drugs has not disappeared. At this time, you may experience some headaches, swelling, bruising and nose bleeding. it is advisable to just relax and use prescribed painkillers. Here are some tips to follow after your nose surgery. 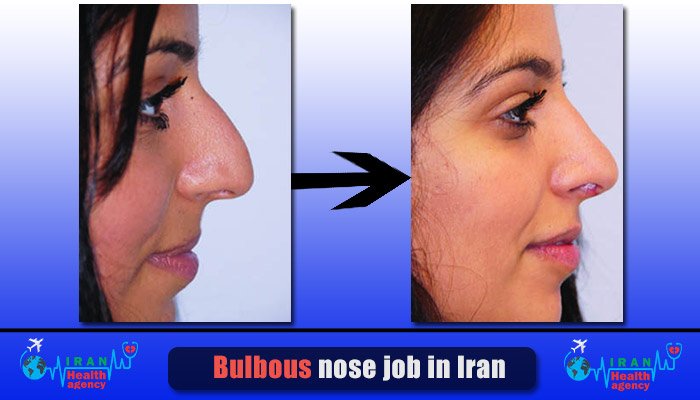 Is recovery duration of bulbous rhinoplasty longer than bony nose?

After nasal surgery the swelling is quite normal plus there is a slight bruising under the eyes in the first week after surgery which will be completely remedied over time. Swelling after broiler nose surgery is far more common than bone nose.

But normally after 8-9 days you can resume the daily activities.

How to get rid of swelling sooner after bulbous nose job?

The amount of bruising under the eyes and swelling depends on the actions and changes the nose surgeon has made during surgery.

Anti-inflammatory and antibiotic ointments will be prescribed by your doctor if they are found to reduce swelling.

how to get rid of swelling sooner after Rhinoplasty

so severity, reputation of doctor, longer time get together to make the bulbous nose job cost more in comparison to bony nose job 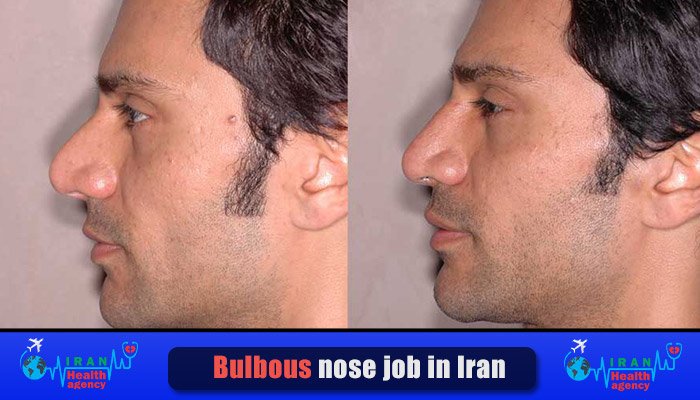 The answer is no, since what is add or reduced from cartilage is remains stable forever. but what is true of the fleshy nose is more severe and prolonged swelling.

Thickness of the skin is a limiting factor. Thick skin is not able to fully stick to the small skeleton beneath it. As a result, the nasal passages become prominent in some areas, especially the upper part of the nose, causing the nose to remain flat and formless despite surgery.

Noted that thanks to new methods and approaches fleshy and bulbous nose job are possible as well as bony ones.

What are the risks of bulbous nose job?

Aesthetic rhinoplasty does not refer to making the nose small, but it also means creation harmony between a bulbous and other facial component. Nasal size reduction is desirable until the nasal breathing function is compromised. Other complications of nasal surgery include:

All You Need to Know About Male Rhinoplasty! What are the benefits of bulbous nose job?

Can bulbous nose job be done under local anesthesia?

The answer is yes, it all depends on surgeon technique and expertise. generally, nose job can be done under either of local or general anesthesia.

Can the bulbous nose be reshaped without surgery?

The definite permanent way to get rid of bulbosity of your nasal tip is only surgery. nasal deformity can be reshaping by filler but there are no methods to make the cartilage narrower.

Recently the usage of enzyme has been getting popular but it has its own complication and risks and doesn’t stay permanently. 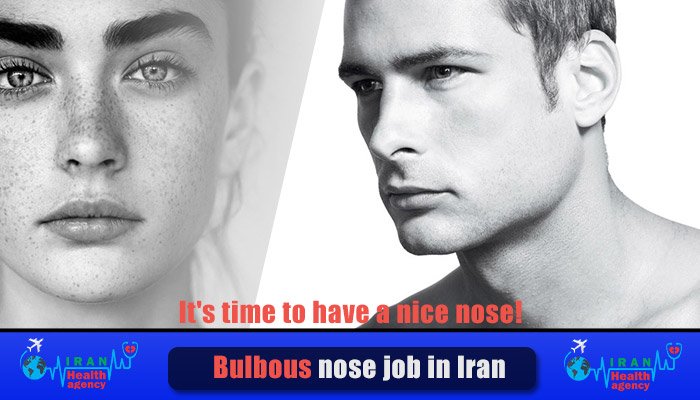 No. The use of lasers in head and neck surgeries for specific problems such as skin lesions, refractive errors and laryngeal lesions are limited, on the other hand laser cosmetic surgeries are mostly propaganda and deceitful.