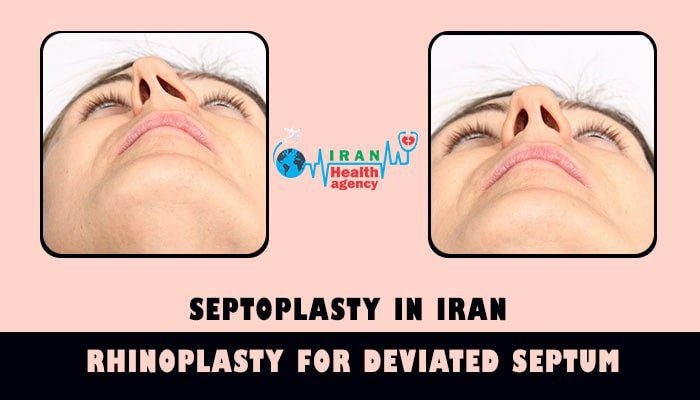 Septoplasty is a type of surgery to treat nasal obstruction. Deviation of the nasal septum, which means the displacement of the wall between the nostrils, often causes this obstruction.

Turbinates that are large bony structures inside the nose may also block parts of the nose. Septoplasty may also be performed to treat chronic sinusitis, remove nasal polyps, and eliminate other conditions that block the nasal airways. 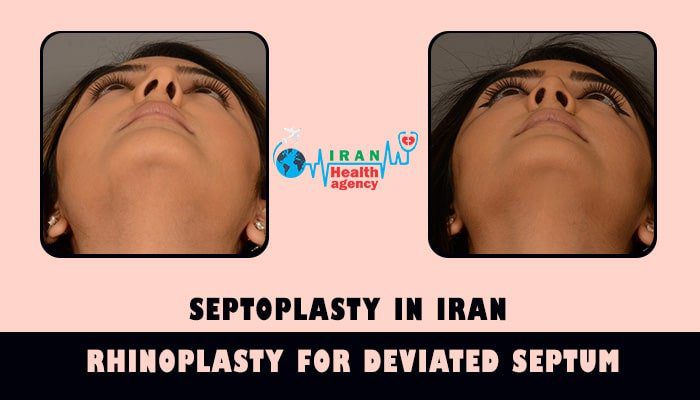 Sometimes, this surgery is recommended to prevent recurrent nosebleeds.

Septoplasty is one of the most common ENT surgeries in the United States. However, this procedure is often performed after other treatments for nasal obstruction have failed.

In this article, we will talk about everything you need to know about septoplasty in Iran, including the procedure itself, pre-and post-care tips, and its risks and complications.

Your main goal is clear, but if you want to know more about rhinoplasty in Iran, I suggest you see nose job in Iran all the necessary information such as:
The best Iranian surgeons, the best city in Iran for this surgery, the price and cost of traveling to Iran for rhinoplasty and …
Get. 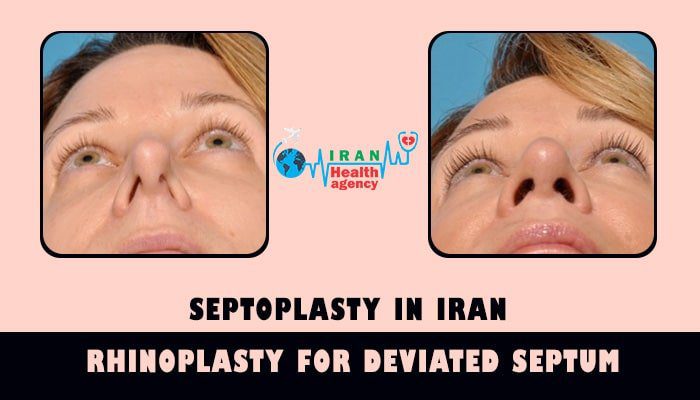 Septoplasty is a type of intranasal surgery that basically aims to correct the septum deviation. The septum is a blade made of cartilage and bone that divides the space inside the nose into two parts. In some people, the septum may be deviated due to genetic or traumatic events. Deviation of the nasal septum can make it difficult for air to flow through one or both nostrils and force you to breathe through your mouth. In addition to causing dry mouth, the inability to breathe through the nose can also interfere with your sleep.

Nasal septum deviation is not the only cause of nasal obstruction but also allergies and nasal polyps can play a role in it. Also, bony protrusions inside the nose called turbinates, if too large, can block the nasal passage. Using steroid nasal sprays and adhesive nasal strips can help temporarily, but septoplasty is the only way to permanently remove the nasal obstruction.

Note that septoplasty in Iran is a treatment that modifies the inner part of the nose and does not change the appearance of your nose. However, you can do it at the same time as rhinoplasty, which in this case, it is called septorhinoplasty.

Deviation of the nose also causes snoring. Does rhinoplasty stop snoring? It might be a good article for you to read.

What is done before septoplasty in Iran?

The surgeon usually performs a nasal endoscopy to determine the severity and cause of your nasal obstruction. In this method, a tube with a camera at the end is inserted into the nose. A tomography (CT) scan can also help your doctor diagnose a deviated septum. The doctor will then consider treatment options and, if you need septoplasty, will begin preoperative procedures.

It is usually necessary for the patient to perform a series of routine tests such as blood tests, X-rays, and electrical monitoring of the heart before septoplasty in Iran. The patient will also be assessed for general health and will be asked questions about his/her medical history, current medications, history of drug allergies, and more.

To reduce the risk of bleeding after septoplasty in Iran, your surgeon will ask you to avoid taking any oral blood thinners such as Aspirin for a week before surgery. Medications such as ibuprofen, naproxen, and some herbal supplements have the same effect; Therefore, they should be discontinued before surgery. You should talk to your doctor if you are taking any medication including over-the-counter medications, supplements, and herbs.

Like other surgeries performed under general anesthesia, for septoplasty, the patient should fast for about 12 hours before surgery. In this fasting, in addition to food, drinking or even chewing gum is also forbidden.

17 questions you had about rhinoplasty but were ashamed to ask it!?

How is septoplasty performed? 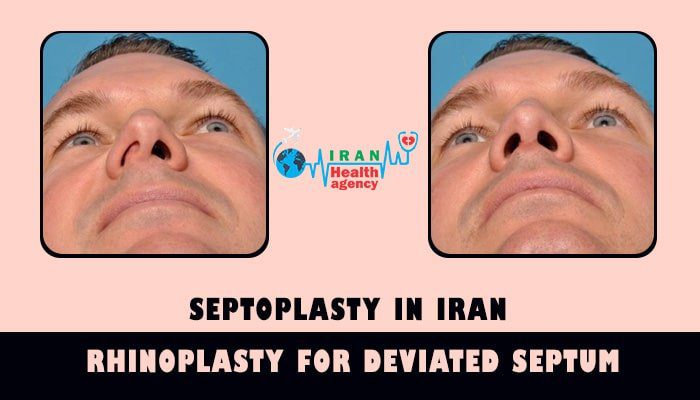 Septoplasty is usually an outpatient surgery that most patients can go home on the same day of surgery. Because most cases of septoplasty in Iran are performed under general anesthesia, the patient is asleep during the operation and will not notice anything.

As mentioned, septoplasty is surgery inside the nose that takes between 30 and 90 minutes. In this procedure, the surgeon makes an incision in the wall on one side of the nose and lifts or removes the mucus through it. The mucosa is a thin membrane that covers the septum, and by removing it, the surgeon can access the septum and change its bone and cartilage. Sometimes it is necessary to permanently remove parts of the bone and cartilage of the septum, and sometimes it is repositioned in the right place after reshaping. Septoplasty in Iran usually does not require breaking the nasal bone. The nasal mucosa will be at its previous location on the septum at the end of surgery.

After septoplasty in Iran, the surgeon usually uses splints or soft packing inside the nose to protect the nose and keep the nasal tissue in the right place, as well as to prevent bleeding and scar tissue formation. The packs are removed after 24 to 36 hours and the splints after one to two weeks. In most cases, the surgeon uses dissolving stitches inside the nose that disappear on their own.

Are there any risks or complications with septoplasty? 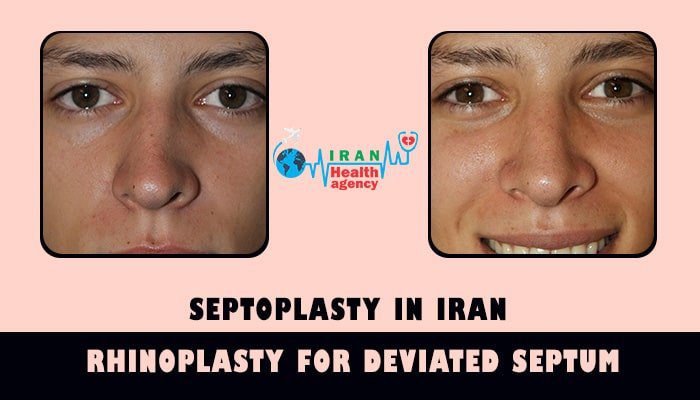 Risks and complications of septoplasty in Iran are very rare because Iranian surgeons are very experienced and have good knowledge. However, although more than 90% of patients are satisfied with the outcome of septoplasty, this surgery, like any other surgery, has some possible complications; Especially if you have not chosen a good surgeon.

Some of these risks include:

If the patient has not stopped taking blood thinners before the operation, excessive bleeding may occur during surgery. In this case, the surgeon may even have to stop the surgery.

Because the inside of the nose is not sterile, infection is possible through incisions made in the nose. Toxic shock syndrome is an uncommon and life-threatening infection characterized by symptoms such as changes in blood pressure and heart rate, fever, and discoloration of the skin. If you experience these symptoms after septoplasty, call your doctor right away.

Another rare complication of septoplasty is spinal fluid leakage. If the surgery is not performed by an experienced surgeon, it may cause a leak of cerebrospinal fluid, which protects the brain. This increases the risk of infections, including meningitis, which means inflammation of the membranes around the brain and spinal cord.

Hematoma is also rare but may occur as a result of surgical error. Hematoma means swelling caused by a blood clot in a tissue or purulent abscess.

Numbness in the upper teeth, lips, or the tip of the nose

Because the nerves leading to the gums and front teeth in the upper jaw pass through the nose, these nerves may be stimulated or damaged during surgery. As a result, following septoplasty, you may experience numbness in the upper teeth and lips or tip of the nose, which is usually temporary and resolves after a few weeks or months.

Perforation of the nasal septum

One of the complications after septoplasty is the formation of a hole in the septum. If you are not serious about choosing an experienced surgeon for septoplasty, you may experience complications like this. In some cases, this hole does not cause symptoms and does not need to be repaired; But sometimes it can cause crusting, dryness, or blockage in the nasal passages. In this case, it is necessary to perform another surgery to repair the hole, in which the hole will usually be blocked by an artificial button.

Changes in taste and smell, sound quality, and characteristics may also occur in rare cases.

How is the recovery period after septoplasty?

Since septoplasty in Iran is done through incisions inside the nostrils, fortunately, you do not have to worry about leaving a visible scar after the surgery. There is usually no bruising around the eyes. However, you may have a tenderness on the front of your nose after septoplasty. Nasal congestion is also common due to swelling and discharge of blood and mucus from the nasal passages. The swelling usually goes away after 2 to 3 days, but drainage may continue for 2 to 5 days.

Pain after septoplasty is minor and is usually controlled with over-the-counter medications, however, your doctor may prescribe stronger painkillers. The surgeon also helps to relieve nasal congestion and sterilizes the nasal passage by prescribing salt sprays or irrigation treatments. If the pack is placed inside your nose, you should breathe through your mouth until it comes out. It takes about 3 months for the nose to reach a relative recovery.

How do I take care of myself after septoplasty in Iran?

Plan to rest completely on the first day. Do not squeeze or even touch the nose. Even if you have a congested nose, do not blow your nose because it carries a risk of nosebleeds. If you have to sneeze, do it from your mouth. To reduce pain and swelling after septoplasty in Iran, use ice packs placed in a clean cloth or towel on your nose and eyes. When sleeping, place two pillows under your head to reduce swelling and congestion caused by surgery.

Do not take a shower or bath in the first 24 hours after septoplasty in Iran. Avoid contact with different people for a while to prevent colds, which can increase the risk of infection after surgery. Also, avoid being in polluted and dusty places.

You can usually resume your daily activities one week or two after septoplasty in Iran and return to work or school. However, you still need to avoid activities that may cause you to fall or put pressure on your nose or hurt it. For example, not only is lifting heavy objects forbidden to you, even straining while defecating will not be in your favor! Also, avoid bending your head and doing strenuous exercise for one to two months.

See your doctor as scheduled because your stitches will need to be removed by your surgeon if they are not dissolvable.

Want to join the discussion?
Feel free to contribute!